3 Просмотры
For the first time since World War II, Japan has command of its own full-fledged aircraft carrier. Japan has completed key modifications to its Izumo helicopter carrier, giving it the capacity to accommodate fixed-wing planes.
Last Sunday, U.S. fighter jets launched a series of flight tests on the newly converted carrier. The flight trials come at a time of heightened regional tensions, with China deploying a record number of warplanes in Taiwan''s proximity.

An F-35B fighter jet, the mainstay of the U.S. Air Force, lands on the deck of Japan’s Izumo-class helicopter carrier, deploying its vertical landing capabilities. After landing, the jet moves forward slowly, guided by the officers on board. Following a quick inspection, it zips down the short runway and takes to the skies again.

This was the first flight trial of the F-35B fighter jet on Japan’s converted JS Izumo. Excluding U.S. Navy vessels, the JS Izumo is the world’s fourth vessel that can support F-35B landings. The trial, which began last Sunday, was the first of its kind in Asia. It also inaugurated Japan’s first full-fledged aircraft carrier.

Yamamura Hiroshi
Japanese Maritime Self Defence Force
The refitting has allowed the JS Izumo to become a multipurpose escort vessel that can carry F-35Bs. From today on, it will be used to defend our country.

The JS Izumo entered service in 2015 and has a total displacement of 270,000 tons when fully loaded. The vessel is equipped with air and sea radars and air defense missiles. Previously, it could carry up to 28 helicopters of different models. With its conversion to an aircraft carrier, it can now hold up to 10 F-35B fighter jets. It’s a substantial upgrade to Japan’s maritime capabilities.

Su Tzu-yun
Institute of National Defense and Security Research
Jaan has been preparing for this shift from pseudo aircraft carriers to the real thing for 20 years. Now that the technology for the F-35B is relatively mature, they took the standard approach and strengthened the deck of the JS Izumo so that it can support F-35Bs.

Japan is making headlines for more than its new aircraft carrier. Last week, Japan deployed three ships to conduct joint military exercises with six countries including the U.S., the U.K. and Canada in the South China Sea. The move didn’t go unnoticed by Beijing.

CCTV reporter
The JS Ise, with a displacement of 13,500 tons, is similar to a light aircraft carrier. The through-deck cruiser design has been referred to by Japanese media outlets as an aircraft carrier-style destroyer. The vessel was one among 17 taking part in a joint drill held by six countries. The exercises’ ultimate goal is to contain China’s strengthening maritime activity.

Chiu Kuo-cheng
Taiwan’s defense minister
Militarily, the situation on the Taiwan Strait is – I would like to report with committee members – it’s the most severe that I’ve seen in my 40 years in the military.

Taiwan’s defense chief said cross-strait tensions are the worst of his career.

To counter Beijing, the Cabinet has proposed extra defense spending of NT$240 billion over the next five years. The funds are destined for defense systems, including the Hsiung Feng IIE missile system. The system is reported to have a range of 600 kilometers and up to 1,200 kilometers when equipped with enhanced missile heads. Meanwhile on Tuesday the U.S. disclosed the number of nuclear weapons it has in stockpile. Altogether, Washington has 3,750 nuclear weapons, including those in active status and those in long-term storage. Japan, Taiwan, and the U.S. are fully on guard, signaling to China to avoid acting rashly. 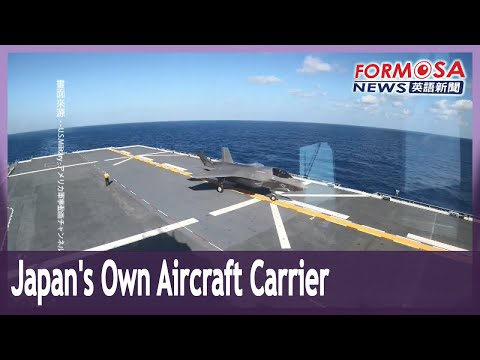 For the first time since World War II, Japan has command of its own full-fledged aircraft carrier. Japan has completed key modifications to its Izumo ...